Home/ACCOUNTING/ACCOUNTING/Politics and economics in Japan
Previous Next

Politics and Economics in Japan

Japan is today considered to be one of the largest economic powers in the world. This is considered to be a miraculous reality, given the fact that Japan was able to become the third largest economy in the world, only two decades after its destruction in World War II. Japanese industrial players are among the largest today, with their arms extending to cover the whole globe. Yet, the major issue I am intending to discuss in this paper is the role that the administrative system in Japan has played in contribution to the superior position that the Japanese economy enjoys among world nations. This role does not only include the influence of the government corporations on the economy, but also the impact of the economy’s structure itself, whether in the pre-war or the post-war period. This will also include an assessment of the role played by the elite bureaucracy in economic advancement.

In a concise overview of the Japanese public administrative structure, it is not difficult to understand why this body has played such an important role in turning Japan into the second largest economic power in the world today. First of all, this body is very large, employing more than one million servants. As a matter of fact, one out of every twelve employees in Japan is employed by the government (806). Secondly, a tradition that has been strongly established in the Japanese public service, even in the pre-war period was the mobilization of young, dedicated, intelligent, skilled and politically liberal bureaucracy in the system. The civil service is divided into eight levels,  mainly controlled by the 10,000 senior civil servants in the three higher levels of the hierarchy, and who comprise the civil service elite in Japan.

Japanese Administration in the Pre-War Period

The emergence of the Japanese administration took place in the prewar period. However, it was closer to a caste system since it only included certain classes of people. The officials, known as Kanri were appointed either by the Emperor or by the government. Nonofficials, on the other hand, known as hikanri were employed by the government according to the rules of employment contract in private law (p.16). 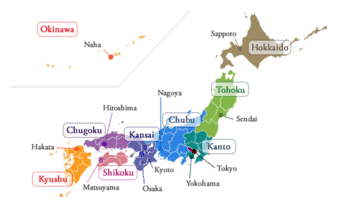 The official bureaucracy in the pre-war period was divided into four distinct classes. In descending order, these were the shinninkan, chokuninkan, soninkan and hanninkan. Their power and prestige were determined by their closeness to the Emperor and by the mode of appointment (p.16).

On the other hand, the nonofficials who enjoyed very little authority and were customarily changed due to the needs of public employment and the budget, were divided into three groups. These were the koin, yonin and the shokutaku. The koin were responsible for the routine clerical tasks, but it was from this rank of nonofficials that that recruitment to the hannin official rank took place. The yonin were responsible for manual labor and finally, the shokutaku who were mainly recruited from retired officials to serve cabinet ministers and parliamentary vice-ministers during their terms.

One of the most important characteristics of the Japanese bureaucracy in the pre-war period was the clear domination of a bureaucratic elite. This elite was formed from the graduates of Tokyo Imperial University. Although by the end of the nineteenth century the examination system was used to hire public servants in the Japanese administration, this system was in effect used only to fill in the posts that were not taken or claimed by the Todai graduates as the Tokyo Imperial University graduates were known. Eventually, these formed more than 90% of the Japanese bureaucracy. One important characteristic of the Todai graduates was their legal orientation, since the majority of them were either graduates of law or law-related majors. Another characteristic of the Todai graduates was their social origins, since informally, the university was only open to rich people in addition to very few poor people who earned scholarships from the feudal lords and other rich people. Consequently, the Todai, and consequently the majority of officials in the Japanese bureaucracy belonged to the upper classes and upper middle-class, especially the sons of civil bureaucrats, military officers, landlords, rich farmers, businessmen and industrialists (p.21).

Nonetheless, the most important single factor that contributed to the formation of the modern Japanese bureaucracy in the pre-war period was the Meiji oligarchs who wanted to modernize the Japanese system by adopting a constitution, a parliament, a cabinet, and a merit bureaucracy. In addition to this, there was a clear, though a limited, orientation among the Meiji to adopt more democratic trends in the Japanese public system, but mainly to impress western democratic systems (p.30)

Since Japan’s entry into the war and until today, the Japanese economy has passed through three major changes or turning points that are responsible for the state it is in today. In the first stage, the economy was mobilized for the warfare service. All resources and capabilities were employed by the war industries, hence accumulating stressful burdens upon the Japanese.

By the end of the war, there was nothing left, but destruction and devastation. The Japanese government started economic reform and reconstruction in order make a new start. Reform was necessary since 13.1 million Japanese were unemployed, not to mention the poverty that spread in the Japanese society, especially among workers and in the field of agriculture. Japan’s hope for a successful reform policy relied the democratization of the economy and the  American support through the Dodge Plan.

For almost two decades, the Japanese economy continued to undergo major reforms and changes that led to the rise of the Japanese economic power. The means that Japan depended upon to stabilize its economy and to regain its economic power that it lost during the war were varied. Japan relied heavily on its labor, but to turn the Japanese labor into an effective economic tool, the government won the sympathy of the allies and freed its labor from the control of the leftist and communist unions. The economy then invested in labor, by improving working conditions, increasing pay, and motivating them. Japan’s real power was in its labor and their ability to develop in a professional manner.

In its reconstruction plans, the government followed the policy of priorities. Hence, reconstruction started with the basic aspects of the Japanese economy which were destroyed during the war. The well organized and monitored industries and markets helped stabilize the economy and increase growth rates. One of the government’s most important steps was to put an end to the black market that prospered during the war.

What helped Japan recover so quickly was American assistance. Until 1947, the Americans had very little concern for the Japanese economy, but with the rising tempo of the Cold War, the US administration realized that Japan could be a valuable partner but only if it recovered immediately. Plans and committees were assigned and support to the Japanese economy took more than one dimension, especially with the democratization of the economy which efficiently started with the reopening of free private trade.

Two factors that played a very important role in Japan’s resurrection were the industrialization process and the restructuring of the economy. The government enhanced heavy industrialization in most fields to reduce costs and increase efficiency and quality. This policy also succeeded in increasing the level of professionalism among the Japanese workers. On the other hand, the restructuring of the economy was necessary to prevent paradoxes of growth, which happen when the growth of one sector could hurt the growth of another sector. Consequently, the government empowered the corporations but also supported the middle-size businesses that could get hurt from competition. The aim in the long run was to turn the Japanese economy into a corporate economy, which would be achieved in the third stage of growth.

The second stage stretches between the 1950s and 1970s. It is a stage in which the Japanese economy witnessed rapid growth. During this period, the Japanese economy maintained an even growth, and was not challenged by any economic events which could undermine its achievements. It was an economy that was based on free markets and movements of sources. Despite the lack of resources needed for their industries, and hardly with enough resources for their agriculture, the Japanese were able to become one of the leading industrial nations, and to reach self-sufficiency in several agricultural domains.

Noticeably, most of the development that took place during this period was not related to the Japanese government. In fact, very little if any change was witnessed in the governmental plans that were set to stimulate the economy in the postwar years. Rapid growth depended more on the ability of the Japanese corporations and institutions to use their resources in the most profitable way. Japanese ingenious was not missing, nor was the traditional hard work and commitment of the Japanese individual worker.

The major industries in Japan:

With the international economic oil shock of 1973, the Japanese government realized that its economic prosperity did not rely on solid basis. Rapid growth was no longer the aim of the economy, since it was not even very possible with the international changes in world economics and politics. The Japanese decided that their economic power would rely on a slow but stable growth rather than a rapid growth, “The recession produced by the monetary restraint in 1973-1975 took on the character of a conversion from  rapid to slow growth, and ‘Operation Scale-Down’ came to mean the policies adopted by firms in response to this switch”(p.259). Thus started the third stage of the Japanese economy, a period known for its corporate prosperity.

Despite the American occupation, the impact of the pre-war administrative system remained strong in Japan. The Meiji Restoration was recognized by the Americans as an important transformation from the traditional feudal system to a modern bureaucracy. However, the American occupation did bring with it a fundamental reform movement within this bureaucracy, although it maintained the elitist trend in the Japanese system.