In the late 1960s, the United States witnessed a cultural revolution that was characterized with the spread of the hippie culture. It became typical in most American cities to find thousands of teenagers and even young adults gathering together in communes, living freely outside society, sharing food, life, sex, drugs and a place to sleep in. These hippies belonged to a wide variety of social sectors, including the rich and the poor, the white and the non-white, and the males and females. They were also characterized with their long hair, casual wear, sometimes the lack of sanitation, and usually the use of drugs, especially LSDs and marijuana. In short, these hippies were against the norms and values of society. They were against the strict rules of civilization that dominated in the United States and the western world. The life that they saw best for them was a free life in which they were not forced to follow any rules. They objected to politics of war, violence, restricted sexuality and to all restrictions on happiness. Above all, the hippies believed that man’s happiness was in a free life in which he could seek pleasure without inhibition or limitation. The hippie culture attracted a lot of attention in the United States and worldwide because of the many pressures that were imposed on society. In the late 1960s, the hippie subculture attracted thousands of young people who idealized peace, equality, and liberty, using drugs and living freely outside the cities. 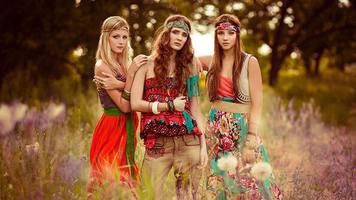 The hippie movement is considered to be a counterculture. Countercultures have always existed in almost all societies. By definition, “a counterculture is a set of beliefs and values which radically reject the dominant culture of a society and prescribe a sectarian alternative” (Yinger 19). Typically, members of a counterculture behave “in such radically nonconformist ways that they tend to drop out of the society” (Yinger 19). While such countercultures exist all the time and in almost every society, the hippies attracted attention because they became a popular movement, hence, resulting in a popular counterculture. What contributed to making the hippie culture more popular in the United States was its strong relationship to the fashionable singing groups such as the Beatles and the Rolling Stones. These singing groups popularized the values that the hippies believed in, namely love, life, peace, freedom and drugs such as LSD and marijuana (Yinger 118).

The hippie counterculture essentially developed mainly as a form of objection to the Vietnam War. The United States had become so much involved in this war and thousands of young Americans were taken to fight in a faraway country that most Americans had never seen before. The new generations saw this war as useless and considered it as a threat to their right to live in peace. Accordingly, the most important ideal of the hippies was to enhance peace and to live in a non-violent world. The hippies were optimists at the beginning believing that they could spread the spirit of peace by living freely without resorting to violence. However, they were faced by the realities of politics as the American government insisted on war in Vietnam. The attractive call to peace by the hippies eventually turned them into a mass movement that attracted thousands of young people to them. The hippies considered war and violence to be irrational decisions that destroyed human life and deprived human beings the ability to control their fate. Their philosophy of peace was reflected by their symbol, an inverted ‘Y’ talisman standing for peace (Zicklin 20).

The second most important ideal of the hippies was equality. Until the 1960s, the United States was still suffering of many inequalities. Discrimination was exercised against blacks, women, minorities and many others. At the same time, equality was considered to be one of the main ideals of American society. For the hippies, to have equality as an ideal in society and at the same time not to exercise it was seen as nothing but hypocrisy. Accordingly, the hippie movement called for the application of equality among all human beings such that there was no discrimination against anyone on any basis. The hippie rallies and demonstrations all emphasized the value of the human being and the fact that all humans are born equal to remain equal. More importantly, the hippies accused capitalism that dominated America of discriminating against those who did not have wealth or privilege. The hippies reflected their equality values and ideals through their lifestyles. They lived together in large communes where they shared everything possible such as dope, sleep, sex, and bread (Zicklin 23).

The third ideal of the hippies was freedom. The young hippie pioneers, in their 20s and 30s, fought against the restrictions imposed by society on the right of the individual to live freely without harassment from social and legal laws. Freedom is the ultimate objective of all human individuals because man is born free and therefore, his freedom should be respected. The hippies emphasized many freedoms, specifically the freedom to choose the way they lived their lives. The criticized and rejected the war in Vietnam because they saw in it a challenge to man’s freedom to live in a world without violence. Furthermore, the hippies emphasized the right of individuals to enjoy a free sexual lifestyle that was not restricted by traditions, inhibitions or social and legal pressures. They mostly expressed this in the care-free sexual life that they led, as adolescents engaged in sexual behavior with each other against the rules of society (Zicklin 23).

At first, the hippies were seen as losers or dropouts who had nothing else to do. However, eventually they turned out to be a serious movement with a clear philosophy affecting social, political and human values. As thousands of young people joined the movement, the hippies began to attract a lot of attention from society and authorities alike.

In contrast to the restrictions of society and the system, the hippies held the banner of “laissez-faire”, arguing that with freedom of action and choice would lead society to much more happiness. Although they were a counterculture, the hippies did not cut themselves off from the rest of society. They continued to hold their jobs and to work in order to earn a living. In 1967, the US Post Office was considered to be the largest single employers of hippies. The majority of the hippies, however, had their individual work, mostly working as independent artists such as painters, musicians, dancers and designers (“Dropouts with a mission,” p.93).

How Did Hippies make their living?

Many hippies, however, made their living by trading in LSDs and marijuana. Consuming these drugs was part and parcel of their culture and philosophy since it gave them an easier access to pleasure through feeling high. Accordingly, thousands of young and unemployed hippies earned income by selling these drugs to other hippies. Others relied on support from their families (“Dropouts with a mission,” p.93).

While most of the younger hippies were generally unemployed, partly because they were still students, thousands of them tried to establish compatibility between their work and their hippie life. These were known as week-end hippies since they only joined the hippie communes during the weekend when they were not working. During the rest of the weekdays, these weekend hippies continued to lead their normal lives in the companies and organizations where they work as if they were not members of hippies (“Dropouts with a mission,” p.93).

Yet, the typical hippie does not stay in the same job for long, and the majority tend to shift from one job to another without any stability. Most hippies in the 1960s were still students or had dropped out of college. The younger teenagers among them, ranging from ages 12 to 15, were known as teeny-boppers. These were generally young teenagers who were not able to get along with their parents, and so instead they joined hippie communities in order to find a meaning in life (“Spotlight on hippies,” p.61).

Early research on hippies showed that most of them were unhappy at home or in society. They were frustrated and disappointed with what they had, and the majority were not able to get along with their parents. The continuous war in Vietnam and the civil rights movements contributed to a frustration that reflected itself in the hedonist and counterculture lifestyle advocated by hippies (“The hippies,” 19).

For the government and community in general, the hippies remained mostly harmless. They were nonviolent and their communes were held outside the urban areas most of the time. The anti-war rallies, although chaotic and massive, remained calm and non-violent, thus giving authorities no reason to complain. The complaints came from hygiene concerns as well as from the abuse of drugs. As a means of rejecting culture, hippies did not commit themselves to hygienic habits such as bathing and showering. Also, as a result of their massive gatherings, they produced huge amounts of garbage and litter which cost the cities thousands of dollars every month (“The hippies,” 18).

The drug problem was also a serious one for authorities. Consuming LSD, marijuana and other forms of drug, except heroine was part of the hedonist hippie tradition. The consumption of drugs grew fast, especially as drug trafficking became widely spread in the United States. Thousands of hippies, especially those in universities and colleges became addicts. The police continuously busted hundreds every month on accounts of drug trade and abuse. These were bailed out by their mates who collected money from every source in order to get their friends out of jail. For the hippies, drugs were the means through which the land of selflessness could be rich, but obviously, authorities rejected this interpretation and instead, continued to track down drug abusers and jail them.

The hippie culture flourished in the US and the western world at a time when major changes were changing the social and political values in these communities. The hippie culture was part of a wider movement for liberation, equality, and peace. Capitalism was seen as an inhuman social system that did not create equal opportunities. War in Vietnam was seen as a violation of human rights and as an unjust crime that had to be stopped. Restrictions on sexuality and social freedom were so unbearable at a time when the younger generations were trying to get more attention and to realize themselves. For those who rejected war, who wanted equality and who demanded pleasure and happiness, becoming a hippie was a possible path. It is not astonishing therefore that most hippies used the word hippy instead of happy to reflect their moods. Although the hippie culture eventually disappeared during the 1970s, the movement has left its marks in the history of humanity. The advancements in the fields of human rights and equality, the universality of peace as a human and political objective, and the liberalization of social life worldwide; all these are considered among the achievements that the hippie movement called for in the late 1960s.

Yinger, J. Milton. Countercultures: The Promise and the Peril of a World