Nations of Africa have often been considered among the least developed countries in the field of democratization. A comparative study of Egypt and Nigeria will reflect on the causes of such a generalisation. The two countries have similar backgrounds, for both states were under British colonial rule or influence for a long period of time, and consequently, both suffered heavily from underdevelopment. Both countries are also ruled by strong presidential systems where the executive enjoys unlimited power, particularly due to the support he enjoys from the military institutions, considered to be the most power establishment in both countries. Finally, both Egypt and Nigeria are considered to be the most two populous countries in Africa, and this alone constitutes a challenge to the transition to democracy. 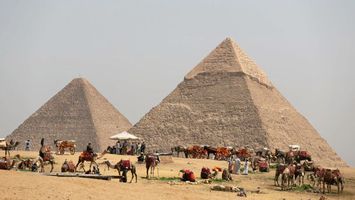 In 1952, Egypt’s royal establishment collapsed and was replaced by a socialist regime established by President Nasser. President Nasser remained in power until his death in 1970. During his lifetime, his major concern was the empowerment of the state, thus increasing centralization and state control over the private sector. Due to the situation of war which Egypt lived against Israel, freedoms were usually brought under check and opposition parties were not allowed to operate.

Following the death of Nasser, Sadat, his vice president, took over as president. Like Nasser, Sadat enjoyed the same powerful privileges of the executive, but he also allowed an air of democratization in the country, particularly during the early years of his rule. Opposition parties were allowed to rule, and religious freedoms were given more space to breathe. However, like Nasser, Sadat emphasized the importance of a centralized state, even though the private sector was allowed to operate with more liberty.

Following the death of Sadat, vice-president Mubarak took over in 1981, having to face a situation of chaos after the involvement of Islamic groups in the assassination of Sadat and threatening to topple the regime. Accordingly, a State of Emergency was declared, a situation which continues to be renewed every three years in the country until today. Mubarak’s powers as an executive were already strong, but with the declaration of the State of Emergency, the executive became all omni-potent in the system. A firm grip was held over the media, opposition parties most of which were banned, and over most religious and non-religious establishments that had to do with politics, directly or indirectly.

Amidst these pessimistic developments away from democracy, the Egyptian judiciary enjoys a clear degree of independence from the state. This means that the judiciary can and may challenge the authority of the executive over certain decisions that may not be in conformity with the law. However, to overcome this difficulty and to neutralize this situation, the executive often relies on military courts which tend to issue sentences and decisions that are in total conformity with the will of the executive, at a speedy time, and without any opposition. More seriously is the fact that more civilian cases and individuals are now considered among the routine operations of military courts.

At the level of local government, little democratization has been witnessed. One reason is that the central government in Cairo continues to have a strong control over the inner areas. For example, the umadas who are the heads of the local villages are all appointed by the government. These umadas enjoy a high level of authority and power in these villages, to the extent that whenever a plebiscite is held, they feel at liberty to fill in the forms without even asking the villagers their opinions. This is how for example, President Sadat maintained the 98% and 99% votes he got on the reforms and foreign policy plans.

Another constraint to democratization in Egypt is the electoral law where an 8% minimum achieved on the national level before a party has the right to representation in the parliament. This has deprived most opposition parties from reaching the parliament, especially that most elections are held a short period before notifying the concerned parties.

Since the 1970s, Islamic influence has also developed in Egypt, both at the public and the state level. Although Islamic parties are not prohibited, the Islamic fundamentalists have survived prohibition through the alliances they held with secular parties, to the extent that these secular parties are now developing into Islamic-based parties. Accordingly, many political figures in the middle are now facing repression from the state on the one side and from the Islamic fundamentalists on the other.

Nigeria and the transition towards democracy:

In Nigeria, the transition towards democracy is not in any better position. First of all, the country has been plagued by a number of military regimes and coups that have rocked the country since the 1960s. Moreover, the country itself is divided into religious and ethnic regional groups where the north has dominated Nigeria’s political street for most of the period since independence.

Military dictators from the north have not only dominated Nigeria’s politics, but they have also prohibited development in the South and the East. Unlike the situation in Egypt where state institutions predominate the political scene, political institutions in Nigeria are very volatile to the extent that they are almost non-existent. This has helped dictators accumulate most of the power in their hands with the support from the military, and at the same time, it has prevented a substantial transformation towards democracy.

Interestingly though, the press has been traditionally free in Nigeria, which is astonishing in a country where human rights and freedoms are not respected. Nevertheless, with a high illiteracy rate which exceeds 50%, such freedom is almost useless in the process of democratization. People rely more on the radio and TV, but even with that, their political choices and perceptions are very limited, to the extent that they are unable to politically participate in the system. This has also given way to the spread of corruption in an unprecedented way.

Corruption in both Egypt and Nigeria

Corruption is a shared problem in both Egypt and Nigeria. However, the lack of public institutions with clear vision and orientations makes corruption more dominant, especially as the military enjoy lavish standards of living in contrast to the majority of the population.

The current situation in Egypt and in Nigeria with respect to the transition to democracy shows that both countries have not yet reached a satisfactory level of democratization. While Egypt is more developed and enjoys less restricted democracy, Nigeria is still way behind, suffering from major problems such as the lack of institutions and plans. Furthermore, Egypt has enjoyed a relative stability in its political system as three presidents have so far exchanged power peacefully since 1952 in contrast to Nigeria’s ever shifting and changing dictators. The military in Egypt plays an important role in supporting the president and supporting the system while in Nigeria, the military is an agent of destabilization and conflict.

Prospects for democracy in both countries are not very promising, but in Egypt, the fundamental grounds of democracy grounds have been laid already in the form of state institutions. In Nigeria, on the other hand, the situation remains far from real, particularly with a high rate of illiteracy and continuous military coups.